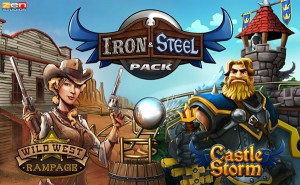 No, it’s not the Shaq superhero table.  It’s Wild West Rampage and Castlestorm tables.  The double table pack will be available this coming week for all platforms except Wii U.  Here are the descriptions from Zen:

YEEEEHAAAW! The Wild West Rampage table stars Cindy, a bold bounty hunter who arrives in the western town of Rackton Point with a bone to pick with the town’s crooked Sheriff Evans. Cindy has her sights aimed on defeating his men and ruining their crooked plans to control the town, but it definitely won’t be easy to loosen Evans’ stranglehold. Hit the trail and experience an exciting Western-inspired playfield complete with a rolling 3D steam engine, swinging saloon doors, a six-shooter ball locker, and duels with members of Sheriff Evans’ posse!

In CastleStorm pinball, players will team up once again with the heroic knight Sir Gareth as he returns to protect the Kingdom from the relentless hordes of vicious Vikings and their raging leader, Chief Ramhorn. The table features single and multiball game modes set within a Viking stronghold, an enormous fire breathing dragon, an armored troll, and even a charming donkey!

This is a clear answer to those calling for more original Zen tables. There are table shots at the link. I’ll post some impressions after I play them.