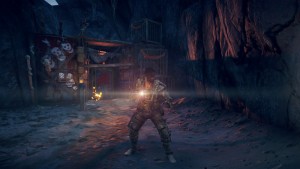 Mad Max is an open world action adventure game set in the wasteland world Max inhabits in the movies.  Though it has some locations and links to Fury Road, the story is not from any of the movies.  It’s another odyssey on Max’s journey to find peace.  Of course, it’s bleak, violent, cruel and post apocolyptic.  That may be the best thing about this game.  The world fits in with the activities and settings found in many action games today.  It’s a game where your character’s psychopathic tendencies are explained by the situation he finds himself in.  Despite Max’s torrent of bloodshed, he still ends up being one of the nicest characters in the game.

The combat is inspired by Batman’s Arkham series.  The driving has a touch of Burnout.  The story is all Mad Max.  The combination shouldn’t work unless everything was polished and neatly interlocking.  I can’t promise anything like that.  The combat is loose, chaotic and frenetic with some animation and camera issues.  The driving is wobbly and wild in all but the best handling cars.  This ok in the open desert, but trouble in tight canyons and murderous for city driving.  Of course, one of the key races takes place in a narrow death track in the city.

It should be a mess, and, at times, it is.  Most of the time, it’s just fun.  You might be tearing through a camp to secure some supplies needed for a local stronghold.  You’re running out of water and are beaten up.  You grab the supplies and run out of the camp.  Just as you jump in the car, a bunch of scavengers arrive in a cloud of dust.  While you peel out, jumpers leap on your car trying to punch or stab you.  You fling them off by slamming into the lead car pushing them into the side of the ravine as the bodies fly.  You quick aim your harpoon at the front tire of the second.  A moment later the tire is flying and the car disabled.  The third car swings around in front of you.  Right as you start to line up a nitrous powered ram ram into their rear bumper, they start dropping mines.  Crap!  You avoid the first but slam into the second.  The engine is smoking.  A quick shotgun blast blows their minelayer’s rear tire, spinning them out.  You hit the nitrous anyway to create some space.  Then you see your escape, there’s a jump across the left ditch just ahead.  You swing wide to line up the jump, one more quick boost and you soar gracefully through the air while your pursuit spins out or plunges into the depths.

It’s that fun level that sets the game apart.  Everything about Mad Max screams mediocre sandbox game.  Except the fun level.  That’s what raises Max above the sum of its parts. It’s not for everyone, but you probably know if it’s something that would interest you.  It’s worth the risk if that’s you.  Even better if you can find it on one of the great sales it’s already been on.  Recommended.

Permanent link to this article: https://www.talkstrategy.com/2015/11/mad-max/