A Death at Chaos Manner 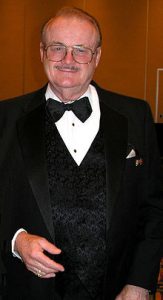 Jerry Pournelle is dead.  He died recently in his sleep according to his son as posted on his website.  I’d love to say I was a huge fan of his sci fi, but really, I think I’ve only read Lucifer’s Hammer.  That was pretty much because I was a Larry Niven fan at the time.  I’ve read some of his short stories.

No, Chaos Manner was the reason I loved Jerry Pournelle.  As a geeky kid reading Byte magazine, his Users Column took me away to a place of amazing computing power and gadgets.  If he said something worked well, it was gold.  Many of my early tech purchases and even recommendations came from info from Chaos Manner.

This was from a time when barriers to entering computing were high.  The costs were often geared towards businesses.  The technical knowledge required to get started was significant especially compared to today.  Many times compatible standards were a pipe dream that might happen in the future.

Jerry was our guide through this labyrinth of technology.  Through all the years he never lost his excitement and enthusiasm.  When the print edition of Byte died, it felt like I’d lost a friend.  Much of that feeling was due to Chaos Manner.

Here’s a little taste from an old issue of Byte (Sept 1992) that I found lying around:

“The first thing I did when I got things set up at the beach house was to install Windows 3.1, updating the previous Windows 3.0 installation that came with Moby Brick.  That worked just fine.  However, when I tried to convert the screen from 640 by 480 pixels to my usual 1024 by 768 pixels, I couldn’t do it.  I suspect I don’t have the right drivers for Windows 3.1.  I’m not compaining: on a 15-inch screen, 640 by 480 pixels is actually good enough.  It’s all I get on a laptop, and indeed about half the Windows-using computers in Chaos Manner are set to 640 by 480 pixels.”

That takes me back in so many ways.  The whole column was spread out over more than 10 pages. It included a list of items discussed that totaled over $25,000 for that month. Each item had a price, physical address of the company, phone (and usually fax) numbers and a number to circle on the inquiry card. 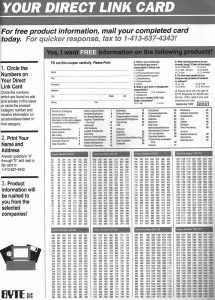 That card was like a Christmas list that would never see any purchases.  I never had the money.  Jerry, you gave me the dreams.  Thank you for that.  Rest in Peace, Dr. Pournelle.

Permanent link to this article: https://www.talkstrategy.com/2017/09/a-death-at-chaos-manner/