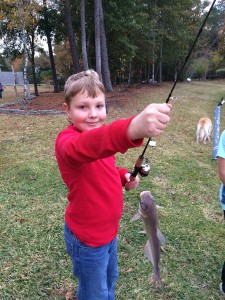 Growing up as the kid of a gamer has to be a bit weird. A lot of stuff I would have had to begged my parents for is just lying around our house. David is the oldest, so he has the most gaming experience of the kids. He’s smart and has great reflexes. It won’t be long before he’s beating me at a ton of games.

I thought I take some time to write about the gaming experiences with each of my children. Then I could check back on them now and then to see how their gaming tastes evolve. I do put limits on their gaming time, and punishment revokes gaming privileges. I’m sure they do end up gaming more than some of their peers simply due to opportunity. They play on Mom’s phone, Dad’s phone, our old phones, the iPad, our android tablet, a couple Leapsters, LeapPads and Leapster Explorers. Then, of course, they get some console and computer gaming time. Now that I think about it, I’m glad we put time limits on them. They could be gaming nonstop.

We also play board games together. This past summer we played chess, King of Tokyo, and Monopoly (and Empire). We’re still working on how to be a good loser and winner.

David does have some school games. I’m not sure I understand some of their thinking. It seems like the school would buy a subscription for a year for age appropriate learning. Most of these websites seem to have the student account expire at the end of the school year. You would think that summer would be a great time for them to keep kids minds in shape before the next year starts. I guess not. Anyway, most of these sites focus on math or reading with a bit of science or social studies thrown in.

I’m not entirely sold on Leapfrog products. Yes, it certainly makes me feel better as a parent that the games are trying to teach something. It just seems like most of the interaction is on the game level and not the learning level. The best thing I can say about them is that they foster flexible thinking. Of course, some non educational games do that as well. I do appreciate the effort. I worry about how they will stand up to the $.99 learning app though. The prices were ok when comparing to a Nintendo handheld but not when looking at the app store.

So how much of a core gamer is David? I actually debated whether to have him start with some of the classics. The problem is that some classics are best left in our rose tinted memories. Of course, more modern for me might be considered old school for some of you. He’s played Super Mario World and some of the original Ratchet and Clank games. He just finished the Ducktales update and the remake of Mickey Mouse and the Castle of Illusion. He enjoyed all of those. They’re not as forgiving as current games, but they’re not ridiculously punishing either.

We’ve played a lot of Wii and PS3 games together. On the Wii, we’ve played Wii Sports (and Resort), Wii Play, Super Mario Sluggers and Strikers, Zack and Wiki and Boom Blox. On the PS3, his favorites have been the Ratchet and Clank series, LittleBigPlanet and Toy Story 3 (toy box mode). He also loved a little game called Supersonic Atomic Powered Battlecars. It’s basically playing soccer with little RC cars. For a little PSN game, it gave us more hours of fun than almost anything we’ve played.

When David started back to school, of course it limited his game time. With their focus on health and fitness, the school is encouraging healthy eating and increased activity. That inspired David to take up Wii Fit again. I used to question whether Wii Fit actually did that much for you. But I can tell you that after some time off, his balance and reactions aren’t what they were when he last stopped. Of course, flexibility is something we all need to work on.

On the Xbox 360, David’s pretty much been playing Kinect games. He liked Kinect Adventures, Kinect Sports and Doodle Jump (which can be a surprisingly good workout, something you wouldn’t expect after playing the phone game). The clear winner in time played is Kinect Party by Doublefine. It’s a great game that understands the limits of Kinect 1.0. Even better, he can play it with his brother and sister. For most of the minigames that makes it even more fun whether they’re good at the game or not. That’s good design for a party game. All of them actually played the precursor of Kinect Party, Happy Action Theater. There was plenty of overlap. Fortunately, Microsoft realized that Doublefine had created the best demonstration of the power and fun of Kinect. They expanded it and made it free for a while. Who knew that would be the best move Xbox would make for years? Kidding.

The 360’s best family friendly games can stand with the PS3’s, but there just are enough or enough variety. It’s kind of sad the most of my 360 library is a bunch of M rated games that my kids have never seen me play. When they watch me play or ask to play a console, it’s usually the PS3. I will say next gen has been disappointing on the family friendly front. I should make an exception for the WiiU, but if they haven’t convinced a fan like me to get one, I worry about its future.

The last game David and I have played together was Lego Marvel Superheroes on the PS4.  Now if I had played all the Lego games, I’m sure I would have detested this experience, but it’s been a couple of years since my last Lego game.  We had  a ton of fun playing the whole game Co op.  OK, there were a few races that I had to do alone since they stretched the usually forgiving controls to the limit.  The flight model need to be completely redone if they want tight control for races.  However, those are completely optional, and we were only doing them for the Platinum trophy.  For the vast bulk of the game, the controls are simple and flexible.  More impressive is that they work so well for a vast array of powers.  Yes, some characters got shorted, but overall the heroes felt distinctive.

The story was a bit cheesy.  I didn’t care.  It played out like a greatest hits version of the Marvel universe.  Special love was given to the recent Marvel Studios movies.  It was neat seeing David discover all the heroes I grew up with.

I should mention that as much as David likes playing games with me, he really loves playing with his baby brother.  He wants to teach him everything.  He encourages him and makes sure the baby feel loved.  That makes me proud as a Dad. 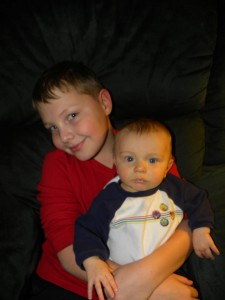 Permanent link to this article: https://www.talkstrategy.com/2014/04/gaming-with-david/