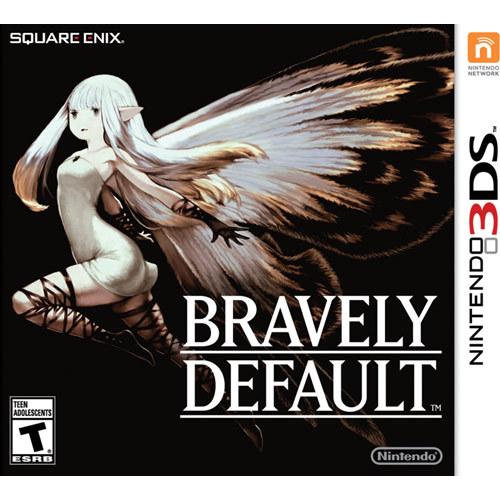 Yes, it’s a demo of a JRPG.  It also has more gameplay that some full games I’ve played lately.  I’m not just talking about indie passion projects or mobile games.  I also admit that Bravely Default isn’t a great name.  It’s memorable, but that’s about it.  Fortunately, we live in a gaming world with products like the Wii, the Xbone (yes, I know), and the Oculus Rift. Weird names don’t necessarily indicate poor quality.

I’ll save a deeper dive into the game for the full version. The demo does exactly what you want it to do. It gives you a good, meaty feel for the game. It showcases the unique features of the game. It introduces and explains some of the more complex systems of the game. It makes you want to play the full game. Finally it gives you rewards to use in the full game for playing the demo. Don’t worry. None of the rewards are game breaking. They just make the initial powerless part of the game a little less difficult.

So what is Bravely Default. It’s a JRPG in the vein of Final Fantasy. It has a job system similar to Final Fantasy Tactics. Overall power is increased by gaining levels through experience. Skills are unlocked by increasing job levels. Jobs normally are unlocked by defeating the holders of that job’s asterisk, but the demo just gives you some to try out.

Your skills, stats, and weapon proficiencies are set by your job, but everyone can dual class and bring in the combat abilities from another job they’ve held. Then each character has a set of support ability slots that they can assign to any ability from any job they’ve held. With four characters with two combat jobs and four support ability slots, you can tweak your party to your heart’s content.

Why call it Bravely Default? That has to do with its main variation on turn based combat. Normally you get one action per turn. Instead of having a block action, a character may default. It does increase their defense like a block, but it also gives them a bonus battle point for their next turn. Next turn they can choose to brave and take two combat actions at the price of slightly lowered defense.

You don’t have to stop there. You can bank up to three Battle Points using default (or some skills that increase BP). Then you can use brave to launch up to four combat actions in a single turn. The system is even more flexible than that. You can actually go negative in BP. That means at any time you can launch up to four combat actions per turn. However, if a character has negative BP to start a turn, they will be automatically skipped until their BP is back to zero (you gain 1 BP per turn normally).

Then there’s Bravely Second.  You can actually stop time and get in some extra turns.  You can save up to three of them by putting the system in sleep mode while the game is running.  You just hit the start button any time during the battle to take an immediate action. 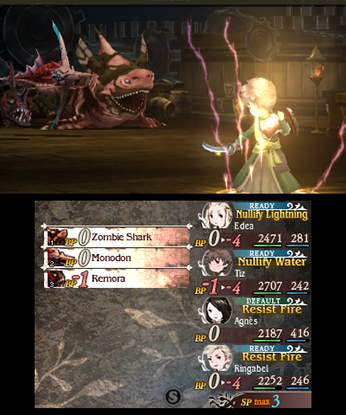 All these systems together give you a lot of flexibility.  You can take on any challenge any way you’d like.  Add in the fact that the demo gives you bonus items in the real game as you make progress in the demo.  You just get a few extra pieces of starting equipment and some consumables like potions, but it’s enough to feel like a reward and make starting the full game a little easier.  So if you have any nostalgic feelings for Final Fantasy, you should check out the demo.  If it sucks you in, there’s a very solid full game waiting for you.  Recommended to all JRPG fans.

Permanent link to this article: https://www.talkstrategy.com/2014/03/game-of-the-week-bravely-default-demo/