Working at Wolfram and Hart

I’m sorry I’ve been away for a while. It’s been busy lately. Combine that with my wife being away on business trips and the stomach flu, the site has been neglected lately. I did want to give you some updates.

First, Planetary Annihilation was fully funded with all stretch goals. That means that Galactic War is coming. I’m not going to hold my breath that they’ll make their exact release date, but I’m glad their full vision will see the light of day. I’m old and jaded enough to realize that this is the best part of game development for the fan. We have just enough information to get excited and fill in the rest with our imagination of the best game possible.

Still, they’re starting from a good point modeling on Total Annihilation and SupCom. I always like the idea that no base is impregnable. Beyond that I’m looking for frantic battles and fast action. Generally, I prefer games where initiative is rewarded though I don’t like victory going only to the highest Actions Per Minute (APM). As you might guess, I like sound strategy, use of tactical advantage and mass, combined arms, good supply lines and initiative over pure APM. As long as I get to blow up some planets, I’ll have fun.

Next, I did get FTL (Faster Than Light). I’ve had a lot of fun with it. I might be getting old, but for me, easy feels more like normal than normal. Perhaps if I get better I’ll move up. I’ve unlocked a few ships and each seems to offer different battle strategies. There rarely seems to be an optimal build order that works for each game.Â  And, in true rogue-like fashion, you depend on the random drops and shop selection to deal with the randomized (but steadily tougher) enemies.Â  I die a lot, but feel like I’m getting better each time.Â  That’s what I look for in a rogue-like.Â  The scifi trappings are just icing on the cake.

Finally, both iOS and Android offer pretty nice apps for updating the blog.Â  Of course, you can’t do too much text on the touchscreen.Â  Dictation is somewhat spotty and not always practical in noisy environments.Â  So I figured I needed a bluetooth keyboard.Â  I was impressed with the sheer number of recommendations for the Apple version.Â  While I like the stylish appearance, I didn’t like the chiclet style and shape of the keys.Â  I also wasn’t thrilled by the price.Â  I ended up going with this one.Â  Yes, it’s from Microsoft, but they’ve made some surprisingly good hardware through the years (the early Xbox 360’s not withstanding).Â  I really liked the ergonomic shape of the keyboard and keys.Â  There are some things I’d change on it, but the feel of typing on it is a dream.Â  That’s exactly what I wanted, and the price was significantly cheaper than Apple.Â  Here’s a picture if you’re too lazy to follow the link. 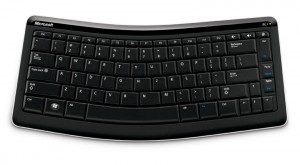 Thanks for the patience and understanding.

Permanent link to this article: https://www.talkstrategy.com/2012/10/a-few-updates/