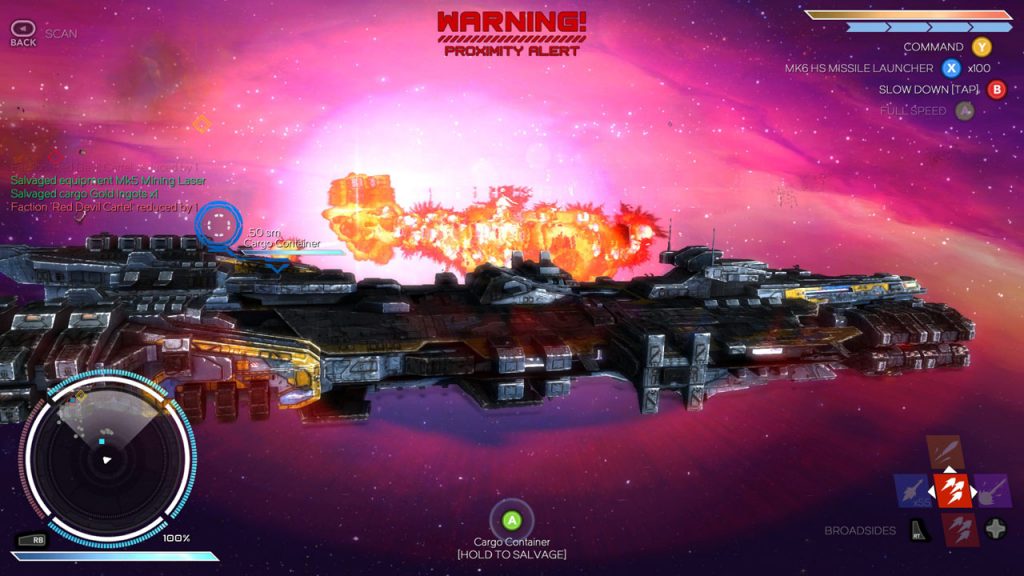 The space genre was dead for many years.  Now, all of a sudden we’ve got Elite: Dangerous, and No Man’s Sky and, perhaps, Star Citizen.  That might be a weak line up for shooters, but it’s a renaissance for the space sim.  In to this comes Rebel Galaxy.   It’s sort of a cross between Wing Commander: Privateer and Independence War.

You’ll be flying around fighting, shipping and mining in whatever combination you choose.  However, you’ll only be flying capital ships from corvettes up to dreadnaughts.  You’ll also be limited to flying in a 2D plane like naval battles or Starfleet Command.  There are small starfighters that can be hired by you or other ships.  They circle above and around the big ships stuck on their plane.  This can make targeting them more difficult, but they never go soaring off high above or below the plane.

This may sound limiting, but once you adjust, you no longer notice it.  Each star system is a huge place with a central star, many planets, asteroid and ice belts.  There are a dozen or more systems.  You’ll always be docking at space stations each driven by their own economic needs.  Depending on your actions some may turn hostile.

You can control any weapon on your ship directly, but only that one.  The system AI will handle the rest.  Most of the time that means you’ll be firing the main broadside cannon.  It’s such a large percentage of your firepower and requires the most finesse to maximize its effectiveness.  As you move up to bigger ships, they have more broadsides cannon.  So even the same weapon gets more effective. The net effect is that in a harried, active battle, you feel like you’re just in control.

This is a small team developed game that uses some smoke, mirrors, and intelligent game design to feel bigger.  Ultimately, that doesn’t matter. The gameplay is fun.  There’s plenty to do, but the game doesn’t wear out its welcome.  The price is right for the size.  Most of the time I was zipping around their universe with a big smile on my face.  Highly recommended.

Permanent link to this article: https://www.talkstrategy.com/2016/10/rebel-galaxy-pc/