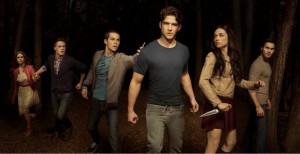 The new season of Teen Wolf has started on MTV.  As old as I am, it’s just bizarre for TV seasons to start in the middle of summer.  In fact, I only knew about the season start because I followed a twitter link and saw it trending.  This spring I caught up on Teen Wolf through Amazon Prime streaming.  I was interested since many fans and critics had favorably compared it to Buffy the Vampire Slayer.  I may be nostalgia biased, but I don’t think it’s there yet.  It is good and getting better every season.

Early on the show seemed too much about showing off the bodies of the attractive cast.  It didn’t take long to find its footing though.  Even now there’s still a little too much surprise!, new monster, but at least, they’re not afraid to explain the mythology to the audience any more.  Overall, interesting plots, unusually deep characters and a strong cast drive the show.

The only thing I don’t like about it is MTV’s promotion.  I can understand live chat during the broadcast and twitter updates though I could certainly live without them.  I don’t understand the after show video chat at all.  I could see it after each season, but thinking about the stars as actors takes me out of the story too much.  There’s a good story there too. Check it out if the genre interests you.  Highly Recommended.

Permanent link to this article: https://www.talkstrategy.com/2014/07/teen-wolf-tv/